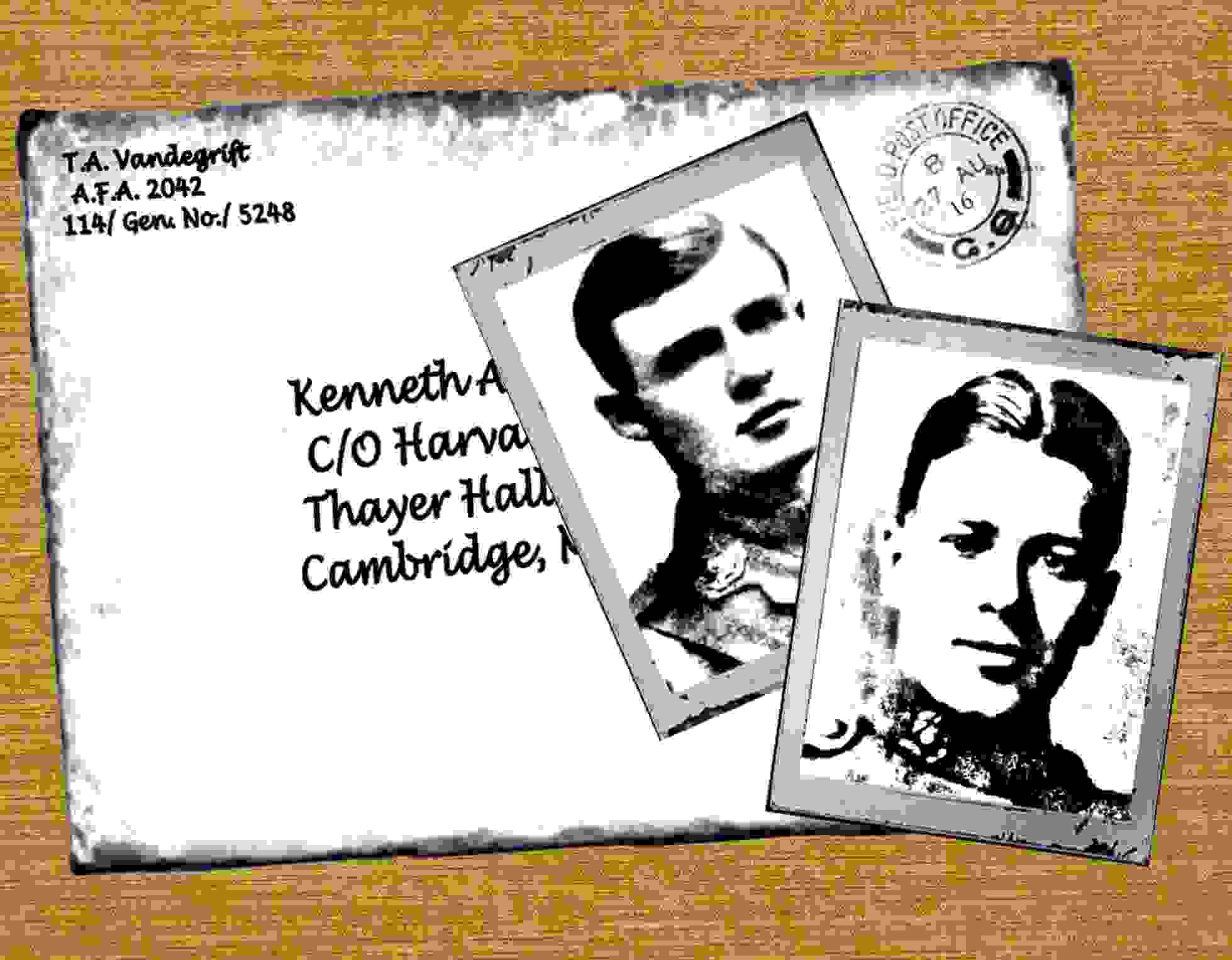 There is no better way to set forth information than to include, as part of the narrative, characters' correspondence with each other.

It suddenly dawned on Kenneth that he had found a single letter waiting for him earlier that day in the mailroom of the Harvard Union.  In a hurry, he had jammed the letter––it was from Tuffy––deep into the pocket of his benny and forgotten about it completely.  He fairly leaped out of bed and retrieved it.  He sat down at his desk, lit a candle, and with great care, he opened the envelope with his pocket knife so as to preserve its integrity, for it would be added to his growing and scrupulously preserved correspondence collection.  Before placing the envelope on the desk, he inspected it closely.  It was thoroughly wrinkled and utterly smudged.  In the upper left corner of its front side was the “AMERICAN FIELD SERVICE IN FRANCE” return address in Paris.  To the left of Kenneth’s somewhat scrawled Cambridge address, a censor had placed his “PASSED” stamp with overlapping initials.  Where postage is usually fixed, there were instead two handwritten words: “In Service.”  On the backside, in Tuffy’s handwriting, he found:

He turned his attention to the correspondence itself which was typed and ran for six pages.  He began to read:

My dearest friend, please forgive my errant quill.  When I do take up the pen these days, it is the pen of a poet.  I am consumed with the need to catalogue in verse this war’s humanity and horror, with the latter running ever-tightening circles around the former.  Poetry is my daily decampment.  I escape into its art and form, but the subject matter takes me prisoner again, and the guards in my cerebral jail beat and torture me only to allow me to break out anew, finding myself trapped in a vicious cycle of escape from reality, evasion of the myriad truths that comprise my unpleasant consciousness, and eventual recapture.  The whole of my meager correspondence has been directed to my beloved parents who vex themselves so over their only child.  And when I do write them, it is an exercise in whitewash, for they live in a continual state of worry and foreboding to which I shall not add.  If they draw comfort from my prevarications, so much the better.  I will not, however, lie to you, Kenneth.

As you are doubtless aware, we lost our beloved RR to tuberculosis November last.  Truth be told, I have yet to recover and it seems the grief may never leave me.  To see him die as he did, our easy-going Railroad, no more than a broken-down pump car in the end, was too much to bear.  Broken on the inside too, at the end he repeated over and over again, shaking his head feebly, “To die before my time, Tuffy, to die before my time.”  He had prepared himself to die in war, in service to his fellow man, but not in bed, a slave to his devastating disease.  On a bitterly cold and appropriately bleak day, we paid him a fine tribute at Christ Church in Neuilly and buried him in the cemetery adjoining.  Every available AFS driver was there, many of them his Harvard brothers, along with so many of the French who had come to know him.  He was carried to the church in the Ford Field Service ambulance he had been learning to drive when struck down by his illness.  His coffin was draped in both the American and French colors and covered with flowers.  A well-practiced minister tugged at our heartstrings.  We then moved outside where a troop of long-in-the-tooth French soldiers, all the young ones being at the front, shot their volleys, a French bugler blew an unfamiliar but poignant bugle call, a member of the AFS blew taps, and, before departing, those of us who were closest to him moved to the head of the grave and quietly bid RR a private goodbye.  The simple ceremony was solemn, dignified, and heartfelt.  Tears flowed like French wine, and the French do love their wine.

Though they have grown impatient with our politicians, toward us volunteers the French breathe only affection and gratitude, and they love to shake our hands, vigorously!  They grab your hand at every opportunity –  bonjour, au revoir, and often in between – look you in the eye, pump your hand the way you might throttle a miscreant child and say, Je vous remercie de tout cœur or the like.  With all the appreciative handshakes in my first few weeks, my arm throbbed beaucoup from their mercis!  The backs of these people have been against the wall so long that it has become their way of life.  Given that they are descended from decadence, they seem a friendly, gentle, intelligent, and splendidly steadfast race, and I am endeavoring to win some use of their native tongue as so much of what they say is now lost on me.  When I chose to take two years of the German language back at Harvard, I chose the wrong side!  I have transported a few of the Hun wounded but they were in no condition to converse.  The French hope the volunteer efforts of us gentleman drivers are simply the vanguard of what will be a full-scale American commitment. Tous et tout pour la France.

Where the strife of war has not touched it, France is a beautiful country.  They seem to have more than their share of glorious sunsets, their wheat fields smell unusually sweet, and in the spring and early summer there is an abundance of colorful wildflowers in the meadows, with brilliant red poppies stretching as far as the eye can see.  Paris is everything they say it is and more.  The countryside is dotted with picturesque little towns, though too many have been reduced to rubble.  Countless shimmering wheat fields have been scarred by impromptu graveyards as the poilus and Germans, sometimes intermingled, are buried where they fell, the former marked by wood crosses and wreaths and the latter by black sticks.  I saw one such graveyard where the French, outnumbered in death as they were in life, were buried on the left, facing the Huns on the right, as if the battle had continued into the afterlife.  I saw another makeshift cemetery where a German aeroplane had fallen from one of the constant air battles and in its crashing had uprooted a half dozen lifeless soldiers, the plane’s sinister black iron cross insignia joining the crosses of the dead.  Even death does not always bring peace in this crowded war.

-- For the missing paragraphs of the letter, you will need to buy the book --

I would be remiss, however, if I did not advise you in the strongest of terms – DO NOT COME!

Faithfully yours in friendship,

What better way is there to communicate what life in the trenches is like, than in soldiers' letters home to their families.  The device of having Lieutenant Remain be assigned the duty of company censor will open those letters to the reader and provide running commentary.